Gut Health and Your Hormones

Hormones and gut health are hot topics. However, the medical community views these systems of the body as separate entities. Fatigue, mood swings, and premenstrual syndrome (PMS) are considered hormonal problems. Bloating, constipation, and gas are classified only as digestive issues. However, the digestive and hormonal systems impact each other like a two-way street.

In many cases of unresolved hormonal dysfunction, there’s an underlying gut issue. If sheer numbers factor into the importance of health, then the gut is really important. The gut is home to approximately 30,000,000,000,00 (that’s 30 trillion) microorganisms. Researchers state the human gut has about the same number of bacteria as the number of cells in the entire body!1

How Do Antibiotics Impact Gut Health?

One of the biggest influences on the gut is the use of medications such as antibiotics.9 Let’s say you have had a history of antibiotic usage for chronic sinus infections for several months during the year. Don’t get me wrong, antibiotics are a miracle when needed; however, chronic use of antibiotics over time may create problems. The word antibiotic literally means to destroy microorganisms.

What Is Dysbiosis and How Does it Relate to Gut Health?

When you swallow an antibiotic, it’s like setting off an atomic bomb in your digestive tract. It kills the bad guys but there are casualties too. Unfortunately, overtime an imbalance occurs leading to the overgrowth of bad guys called dysbiosis. The imbalance can be an overgrowth of yeast, bacteria, and/or parasites.

The dysbiosis can manifest into physical stressors such as constipation, diarrhea, gas, bloating, and farting. The adrenal glands are called upon to deal with these stressors. The adrenal glands produce a hormone called cortisol. It’s designed to help you deal with stress. Stress physiology is the same whether it’s a bear chasing you or your boss yelling at you or you feeling bloated all day. Stress can be in the form of mental, emotional, and physical stress. More specifically, gut stress may impact the hypothalamic-pituitary adrenal (HPA) axis.10,11 Think of this HPA axis as the air traffic control tower of cortisol.

There’s a big difference between mental and emotional stress versus digestive dis-stress. When you go to sleep, you get a mental and emotional break from your boss, family, emails, etc. Unfortunately, if you’re harboring the wrong kind of friends (i.e. parasites, bacteria, or yeast 😢😭😪), your body is actively trying to get rid of these guys (You can’t just unfriend or block as we do on social media). A dysfunctional gut becomes a 24-hour, 7-day week stress. The body actively tries to fix the gut. Even when you’re sleeping, the gut is working to get rid of the bad guys.

What Are the Consequences of Having a Dysfunctional Gut?

The consequence of your body fighting off your “friends” is a production of interleukin-6 (IL-6). Interleukin-6 is an immune messenger produced in times of mental, emotional, and physical stress. It creates inflammation in the body and saturates IL-6 receptors in the midbrain. This stimulates a part of the spinal cord called the intermediolateral cell column (IML). This is critical to understand because the IML is what stimulates our sympathetic nervous system. Remember, you’re supposed to be sleeping and resting not fighting World War III! To make matters worse, the sympathetic (“fight or flight”) nervous system is triggered, thus producing cortisol. This creates a snowball effect.

This abnormally elevated cortisol level inhibits the release of melatonin. The lack of melatonin disrupts sleep. In addition, the adrenal glands release epinephrine and norepinephrine in this time of stress. This is the reason why so many people wake up at 3 am and wonder why they can’t go back to sleep. You wake up unrested and fatigued during the day. Little stressors that never really bothered you, bother you. This ends up triggering more cortisol release which puts your body in a state of hypercortisolemia.

Elevated levels of cortisol are normal and help us in times of stress, but chronic hypercortisolemia has huge ramifications on our sex hormones. To give you an idea of how gut health affects cortisol and in turn impacts sex hormone output, I need to explain how the brain factors into this.

A dysfunctional gut is like being chased by a bear all day long, your body is not safe. There’s a part of the brain called the limbic system. One of the many functions of the limbic system is the mechanism to keep us safe. If you’re constantly stressed (i.e not safe) the brain thinks that survival and safety need to be prioritized.

Think of a rabbit in nature. The priority of the rabbit is to be safe first and not be eaten. The second priority is sustenance: food. The last thing on its mind is to procreate (i.e have sex). As humans, our limbic system is the same. If you’re stressed all day (not safe) and eat inappropriately (no sustenance) then the body thinks sex is the last priority. The body preferentially produces cortisol to get you away from the bear and sex hormone production suffers. The chart below refers to this mechanism as pregnenolone steal. The raw ingredients to produce DHEA, testosterone, and estrogen are shunted to produce cortisol to deal with the immediate threat. 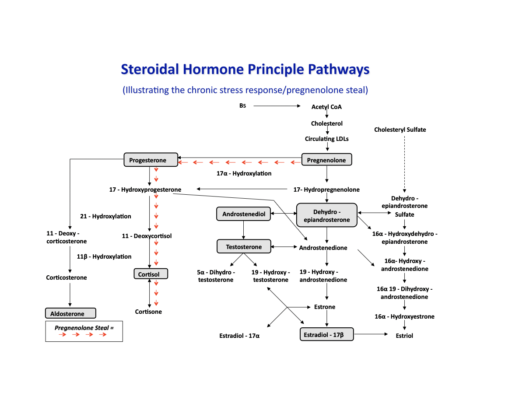 Therefore, you have females suffering with polycystic ovary syndrome. (PCOS), premenstrual syndrome (PMS), and menopausal symptoms. More than ever, males are suffering too with low testosterone. The typical solution is to take bio-identical hormones or inject exogenous forms of testosterone. However, many hormonal imbalances are not resolved or worse yet, they become worse. In many unresolved hormonal imbalances, gut issues may be that hidden iceberg, especially if a person has overt gut issues. It’s imperative to address the gut issue first then assess the stress level of the individual.

In these cases, the answer is never an easy one but getting to the root cause of the problem is critical. In fact, it’s the only way to address it. I can’t stress (pun intended 😜) this enough. If gut health is established and stress levels are managed, sex hormones bounce back, and many hormonal symptoms disappear.

If you want to learn how to improve your gut health, get in touch with us online today.